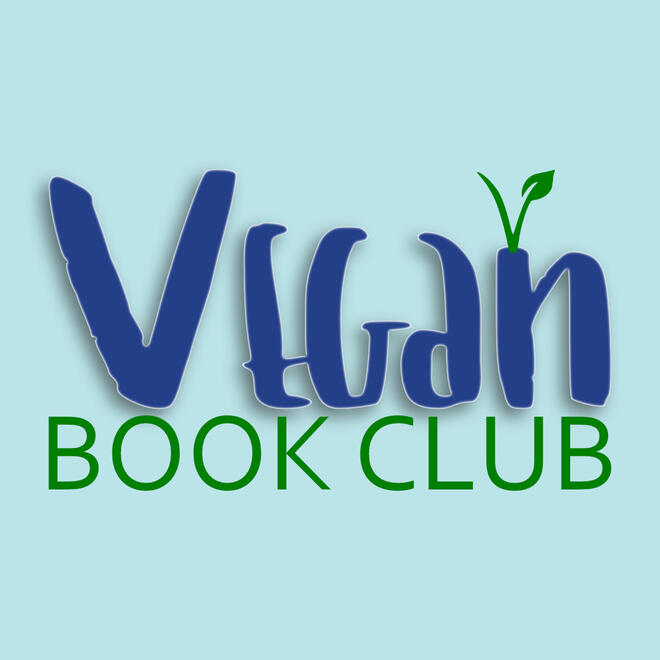 Drive Your Plow Over the Bones of the Dead is a Polish novel that falls under the murder-mystery genre. The story follows Janina, who is known as a crank and a recluse in the remote Polish village where she lives. She is even known to prefer the company of animals to humans. When Janina's neighbor, Big Foot, and eventually others turn up dead, she believes she has the answers to the investigation. But will anyone listen?

Originally published in Poland in 2009, Drive Your Plow Over the Bones of the Dead was awarded the 2018 Nobel Prize in Literature.

The Green and the Red: Q&A with the Author and Translator

Thanks to Ashland Creek Press, the publisher of The Green and the Red, Vegan Book Club had the opportunity to ask Armand Chauvel (author) and Elisabeth Lyman (translator) some questions about the novel. We learn about the inspiration behind the novel, the veg scene in France, and more, including one of the recipes featured in the book!

Our Q&A can also be found on the Vegan Book Club Goodreads page.

1. What was the inspiration behind The Green and the Red?

Armand Chauvel: The real catalyst was that I was tired of always answering the same questions from the non-vegetarians I knew. I decided I might as well write a book to answer them, so I could just put it in their hands and say, “It’s all right here!” Since there were already a lot of good non-fiction books on the topic, I felt a novel would be the best thing—something humorous to address the issue with a light-hearted approach while still conveying the basic facts of vegetarianism and veganism. And it needed to be a romance too, since—as everyone knows—we French are romantics at heart.

2. Have you had run-ins with people like Astrid and Auguste, who have such a distaste for vegetarians/vegans?

AC: Astrid and Auguste comply with the laws of comedy, which means taking characters to an extreme. Personally, I’ve never met anyone in France who was as fiercely anti-vegetarian as those two. And I hope I never will, even though I can sympathize with Auguste! But I have met lots of people who become defensive and sometimes even aggressive when the topic of vegetarianism comes up, as if the mere idea were a condemnation of their character or an insult to their culture.

3. The culture in France—at least in the novel—is very anti-veg. Has the veg scene grown or changed at all since the novel's publication?

AC: Things in France have changed a lot since 2013, the year when I wrote the book. Today, 30% of the French describe themselves as flexitarians. But don’t let that fool you—meat-eating remains very firmly anchored in French culture. One of the biggest changes is that French food manufacturers are rushing to develop vegetarian and vegan products, citing the health or environmental benefits, or (albeit to a much lesser extent) for the well-being of animals. So I think that no matter how Auguste and Jean-Sylvain might feel about it personally, Nedelec, the meat-product manufacturer in the novel, would undoubtedly be working on plant-based alternatives to its products in the world of 2020.

Elisabeth Lyman: Around 2016 or 2017, veganism suddenly gained a lot more recognition in France than it had ever had before. New vegan restaurants began popping up in Paris like mushrooms, to the point that I could no longer keep track of them all (in 2009, when I moved to France, there were zero vegan restaurants. There are now around 70, and about the same number of vegetarian places). One of the biggest changes was in June 2017 when the organic grocery chain Naturalia opened three fully vegan locations, adding a fourth some months later. Today, just about everyone has heard the term “vegan” and more or less knows what it means, which in itself is quite a victory. However, unlike in the US, UK and Germany, you will still struggle to find anything vegetarian, let alone vegan, at most mainstream restaurants in France. But as Armand says, plant-based products are beginning to appear in mainstream contexts like ordinary grocery stores (you can now get the Beyond Burger at a major French retail chain and not just at specialty vegan shops), so it’s probably only a matter of time until more restaurants add veg options to their menus.

4. Different types of vegetarians are depicted in the novel, some extreme and some more moderate. Which do you identify more with?

AC: When I wrote The Green and the Red, I identified the most with Léa. To get through to the average person, I felt the best approach was to show the positive sides of plant-based eating and be diplomatic. In 2020, given the urgency of the climate crisis, I’m not so sure that’s enough. But by nature, I’m skeptical of the more extreme activism tactics and think that people who try to bring about an impossibly perfect world are not necessarily helping us get closer to an achievable better world.

EL: I identify with just about all the vegetarian and vegan characters in the story in some aspect or other, and think having a variety of outreach approaches is useful since different people are receptive to different things. But I find that “disruptive” type actions such as going into restaurants and making emotional speeches to the customers there are usually counterproductive on the whole and do the cause more harm than good.

5. Have you had any of the vegetarian dishes described in the novel? What's your favorite?

AC: When I wrote my first draft, I wasn’t really thinking about the feasibility of the dishes I described. I just wanted them to sound as appetizing as possible. This may disappoint some readers, but I’m not an especially good cook and don’t have very gourmet tastes. My 10-year-old son can confirm this!

EL: I believe at one point a vegan tiramisu is mentioned… the inspiration for that came from an amazing recipe in Miyoko Schinner’s book Artisan Vegan Cheese. And one of the novel’s readers, the blogger behind One Happy Table, came up with a recipe for the pumpkin wonton soup that had only been imaginary up to that point! I made it and it’s really very good.

6. Your background is in journalism—did that influence your approach to writing this novel?

AC: My experience as a journalist was helpful. I’d worked for a food-industry journal and had often written about the marketing of food trends for a French magazine. So I was pretty familiar with restaurant business models and knew how marketing directors talked and thought. I used all of that to make the story more credible.

7. What was the goal of The Green and the Red? Were you hoping to change meat-eaters’ minds?

AC: Yes, one of my goals was to reach non-vegetarian and non-vegan readers, to inspire them to at least think about things and take a new look at the steak or slice of ham on their plates. I may have been naive to think a novel could make a difference, but I’m always very pleased when omnivores tell me the story made them think. And of course I also hoped readers would find the story entertaining.

8. We learn about Léa’s decision to go veg, and obviously Mathieu’s. What prompted you to make the switch?

AC: Like Léa, I went vegetarian after seeing the documentary Earthlings. I’d never been a big meat or fish eater, but the film inspired me to give those things up. I noticed all kinds of benefits right away.

EL: One day I saw a poster showing a piglet and a kitten, with the text “Which one do you pet? Which one do you eat? Why?” and realized I had no good answer for that. On the one hand, I was doing so much to make sure my beloved cat was comfortable and happy, while at the same time contributing to the misery of other animals who weren’t so lucky. I made the change that very day. Later, after I moved to France and met a bunch of vegans, I stopped consuming dairy and eggs as well.

9. What authors or books inspire you and your writing?

AC: There are so many writers I love and admire! Guy de Maupassant is probably my favorite French author. When it comes to contemporary fiction, John Vaillant’s book The Tiger, which I’ve just finished, is one that I admire. But when I set out to write The Green and the Red, I decided the style should be as simple and direct as possible. In the novel I’m writing right now, the style is more complex, but I still try to combine humor and a light touch with meaningful ideas that deserve to be taken seriously. That balance of things interests me more than style. Unlike many, I think the goal of a novel should be to take a position on an issue and convey a message, but of course without moralizing.

AC: I’m writing another comedic story, but it’s set in Burgundy, in the winemaking world. This one isn’t about vegetarianism but how the modern world has cut us off from our inner lives... from our spirituality, if you will. That isn’t normally a subject that lends itself to humor, but the fine wines of Burgundy have unsuspected benefits and (without any special intention of promoting alcohol), I hope to prove it. This book has a lot to do with environmentalism, and more specifically resource distribution.

Want to be Featured on Vegan Book Club?

Vegan Book Club's community is not only diverse but extremely talented...and we want to show you off!

Whether you have a book to promote, some new artwork, or some other exciting project, we'd love to hear about it and share it with our members and followers.

Send us an email with the following:

Or fill out this form.

For authors/publishers, you can also share your books with our Goodreads members here.

Events and other things you would like to promote can be shared here.

We want to ensure that everyone who wants to take part in Vegan Book Club's monthly group reads is able to. Here, you can find convenient and (ideally) budget-friendly resources so you can read along with us.

Feel free to share any additional resources that you think would benefit Vegan Book Club and its members!